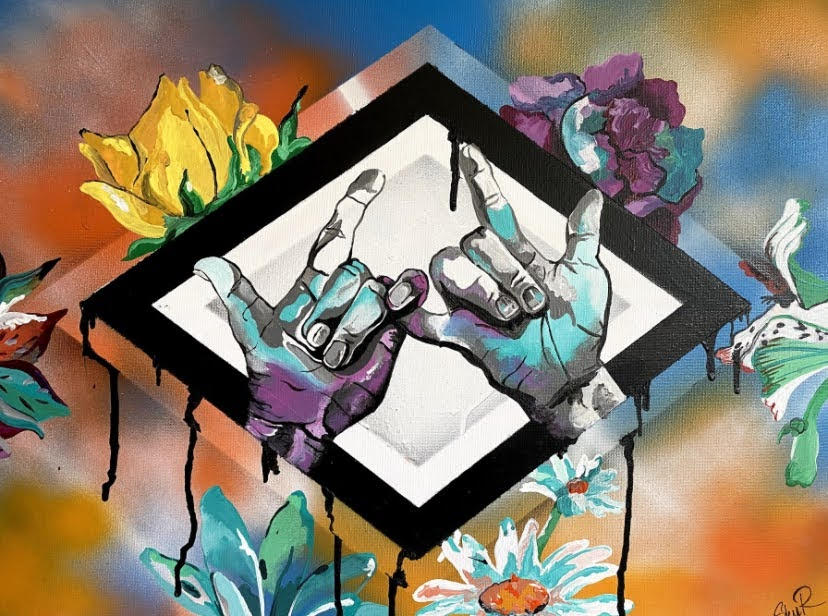 Someone once suggested the best way to grow as a person is to try things that scare you.

Little Sister and Fort Wayne artist Sky Rodriguez understands that proverb perfectly after completing her largest project ever last September. As part of an Art This Way exhibition last fall, Rodriguez, 24, completed her first outside mural at 222 Pearl Street. It also happens to be the largest project she’d ever attempted, and it almost never happened!

When Art This Way approached Big Brothers Big Sisters with the opportunity, Director of Development Shelley Schwab sent Rodriguez the information to submit a proposal. Rodriguez was interested but she also wasn’t. She knew she wanted to try creating murals someday but wondered if this was the right time. She was already swamped at her job as an operations clerk in Purdue Fort Wayne’s Office for Undergraduate Admissions.

But her girlfriend Michellie Hannah kept encouraging Sky to take a chance.

“I had no idea what I was getting myself into,” Sky said. “I missed seeing the deadline on the information in the link, and when I finally saw it, I had three days to come up with something. I finally got everything submitted at 11:59, just before the deadline.”

Sky didn’t think she’d be accepted, but when she received the congratulations email it came with some requirements to change her original concept which was obviously promoting BBBS. Instead of being discouraged by this, the adjustments gave Sky more time to perfect her vision and be a little more understated with her support of BBBS.

A 2019 PFW graduate with a Bachelor of Arts, Sky’s final vision required countless hours over six days, designing with spray and acrylic paints. She even had to dodge some rain, just hoping her work was dry enough to hold up. She also had to work around construction on the building to the mural’s immediate left, causing her to wear goggles to avoid flying wood chips on windy days.

The painting is full of symbolism, starting with the hands which show the American Sign Language for Love. It’s originally a picture of Sky and Michellie’s hands and includes a pinkie promise.

The hands are surrounded by three diamonds which illustrate the concept of forever, and they might have been the trickiest part of the mural because they were actually painted on the wall after the hands, requiring Sky to tape off everything to protect the work she’d already created.

The flowers represent birth to a new relationship that continues to grow, and the blue and purple colors in the hands represent the transferring from one to another and becoming a pair.

“She helped guide me through some of the most difficult times of my life,” Sky said. “She was also one of the few people who actually encouraged me to follow my dreams of becoming an artist. With her encouragement and the unconditional support from close family and friends, I am proud to hold a Bachelor of Arts from Purdue University Fort Wayne.”

After the mural was unveiled, Sky received congratulations from everyone present, and several people approached to ask about her work and suggest potential opportunities.

“I felt really great about myself afterward,” she said. “I have done pretty large projects before, but never one that the entire city was going to see. That’s what really got me. It sunk in that that many people were going to see it.”

Because of a busy work schedule and working from home during the pandemic, Sky hasn’t had much time lately to practice her art other than doodling occasionally at her desk. She’s thinking about a new project of 10 large-scale charcoal portraits of those who have impacted her art career.

Examples of her work can be seen on her Instagram page at Blueskyarts87.