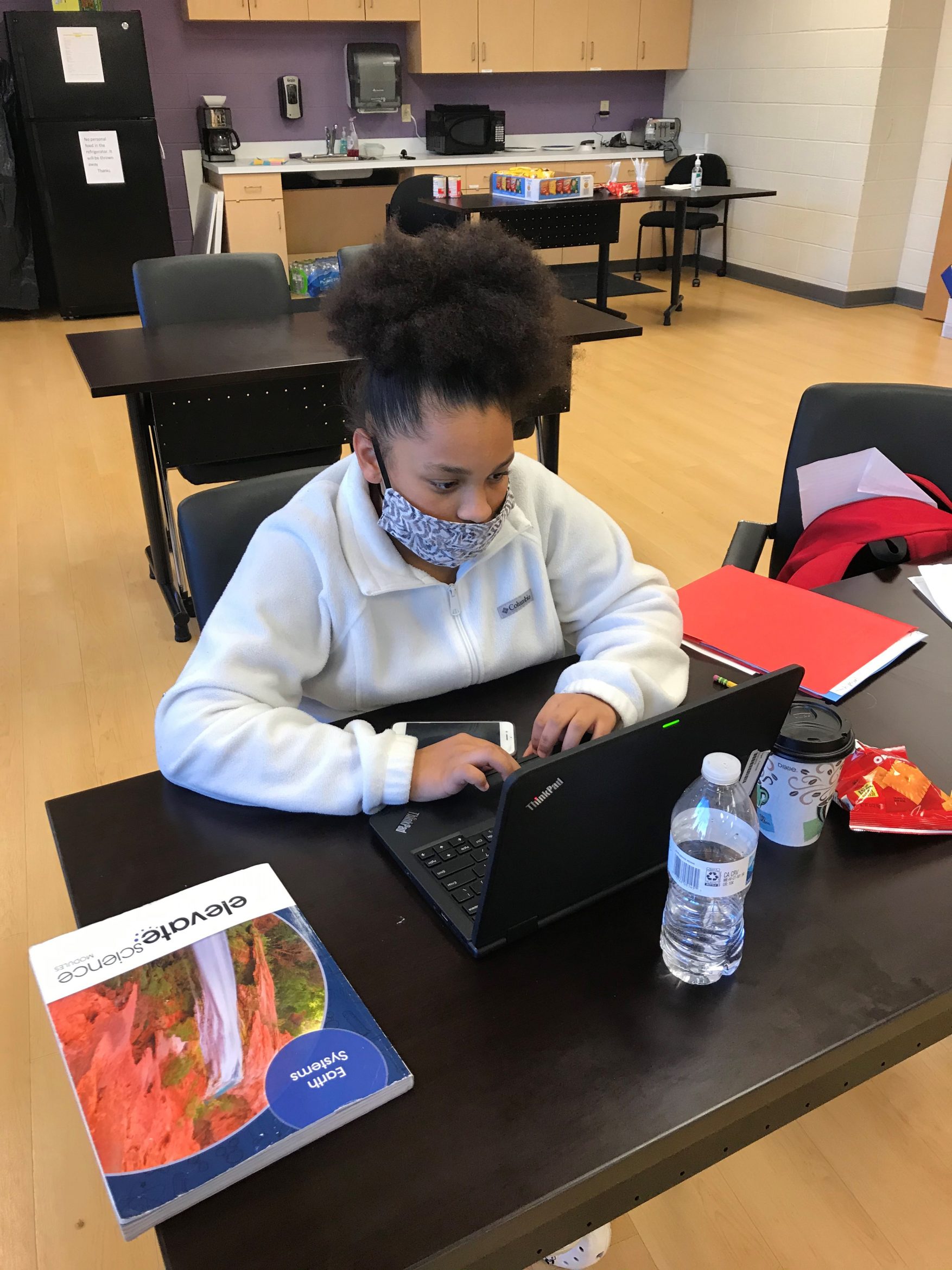 The biggest problem with online learning, 11-year-old Harmonie said, is that a lot of times there’s no one at home to help when you run into a problem.

As a former school teacher, Big Brothers Big Sisters Chief Executive Officer Josette Rider sensed an immediate problem last fall when the pandemic forced schools to shift to online learning. The option was acceptable for most, but what about those who didn’t have a parent working from home or who lacked suitable study areas or stable internet access?

Rider’s suspicions were confirmed the more she talked to Littles or heard back from her match support specialists as they regularly talked to parents, Bigs and Littles. The standby system worked for some, but not everyone.

“I knew they weren’t going to school, and we have worked our tails off for them to get their grades up,” Rider said. “Some were going backwards fast.”

As she continually does, Rider came up with a possible solution, and Match Activities Coordinator Jaren Harmon became its backbone. They teamed to develop a new BBBS program called Learning Pods. The local agency had plenty of space, solid WIFI access and access to the necessary iPad equipment to host students who were struggling or simply needed more structure. Because the in-person match activities were canceled, Harmon expanded her role to step up as the program’s coordinator.

“I was talking to one of the moms who usually comes to every single match activity, and she was telling me early in the semester how much she was struggling between working and keeping her kids on track for school,” Harmon said. “So we decided we would start up a program to ensure that the kids had all the resources they need.”

Students were invited to the BBBS of Northeast Indiana agency from 8:30 a.m. to 2:30 p.m. where they are served breakfast and lunch and given assistance signing into their virtual classrooms. The cost is free, and transportation can also be arranged.

More than 20 students have taken advantage, about 10 per day. The staff of Harmon, Match Support Coordinator Miranda Jackson, education consultant Jorie Rodenbeck and Little Sister Courtney Scoles are on hand to help set up tablets, encourage, make sure students are on time for their Zoom meetings and help with homework. They’ve gotten so familiar with the kids they can rip off reminders five minutes before each scheduled class without looking.

“It’s been interesting because a lot of these kids were signed up by parents or Match Support encouraged them to come so they didn’t really know what they were walking into,” Harmon said. “Seeing them the first day just picking out a table and where they were going to sit to knowing them now is a big difference. They have opened up so I know what classes they are anticipating struggling with, and what classes they triumph at. It’s just cool seeing them develop over getting to know everybody.”

Usually, a staff member will sit with three or four children at a table to keep everyone focused, safe and distanced. That helped develop trust and communication.

“Once you get to know the kids and their habits, it allows you do help them more,” Jackson said.

There have been a few challenges for everyone such as math.

“I was in math tutoring myself when I was young,” Harmon said with a laugh. “It’s actually kind of fun because one of the kids was in pre-algebra and needed some help. It’s almost like a puzzle to me, and I give myself a pat on the back when I can get an answer right. Yes! I still got it! I have to call my dad and tell him all that math tutoring paid off.”

Everyone involved believes this kind of program could translate well to other BBBS programs around the country.

“It’s a great feeling to have staff that steps up and sees a need and comes with passion,” Rider said. “They said they would do extra and whatever it takes during that time. That’s why we are here! And there’s a reason we are considered exempt from the shutdown. Our kids need us and that’s what we signed up for.”

Rider says Harmon leads with her heart and is the type of person who will make an impact on the world.

After dealing more with elementary students during the first semester, the decision was made to concentrate on middle- and high school students in the second semester, encouraging them to keep progressing toward graduation.

“It helps me get more help if I need something since I’m not in school for it,” 11-year-old Ariq said. “It’s been kind of hard because I don’t get to see my friends in school. This isn’t as much fun, but it’s still positive.”

It was also a lot more fun celebrating his birthday with friends instead of by himself at home.

For more information or to join the program, parents can reach out to Harmon at [email protected] or call the agency at 456-1600. She’ll ask where the kids stand academically, what the goals are and what subjects they may need the most help in.