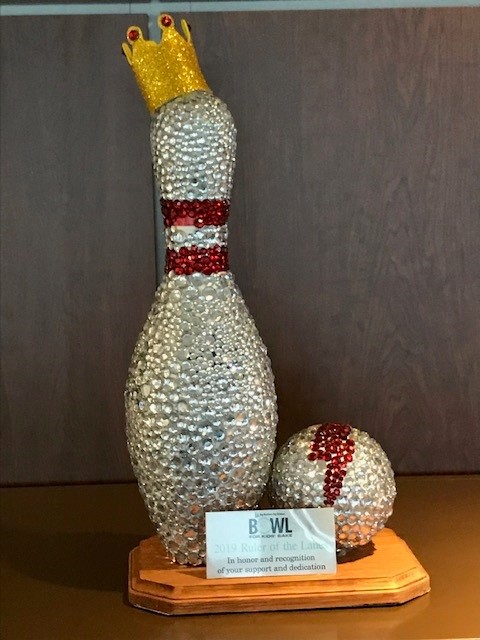 The best thing about athletic competitions are the rivalries, and the same is true of Bowl For Kids Sake. Antagonism usually pushes opponents to even higher levels of performance, but it’s all in good fun.

The annual Big Brothers Big Sisters fundraiser grew an epic matchup the last time in 2019, as Indiana Michigan Power (I&M) won the title “Ruler of the Lane” by knocking Wagner-Meinert off the throne it held for eight years – for a contest Wagner-Meinert initiated! The trophy goes to the Northeast Indiana company that raises the most money for the charity event, and in 2019 I&M raised $10,146.

It’s been an extremely long 26 months living with the pain of regret for Wagner-Meinert Llc, just itching for a chance at revenge!

“I think we just identified our competitiveness,” said WMi Project Engineer Kalen Cartwright, who also happens to be the co-chair of Bowl for Kids Sake. “It’s not something we take lightly. I’ll go back to looking at the size of Indiana Michigan Power and the size of Wagner-Meinert and say look at all it took for that type of corporation to take down Wagner-Meinert, which is relatively a smaller company. It takes a lot, and we’re ready to take back the title.”

Ooooohhhhh, touchy!!!! Let the grudge match commence! Ringers have been contracted, and preseason practices have included a new intensity.

Actually, losing the trophy is personal (not simply personnel) for WMi employees. Co-founder Tim Wagner was a huge BBBS supporter, a member of the board of directors and a national BBBS award winner before he passed away in 2016. This event was his baby, and his employees caught his passion.

“That was just an internal annual motivation that allowed us to come together as a company and have fun, and it gave us a good weekend to support Big Brothers Big Sisters,” Cartwright said. “We’d have some internal competitions to see who could raise the most money and have the highest score. It’s not hard to get participation.”

BFKS is not just a tradition, but a relationship for Wagner-Meinert.

“There’s a lot of people who have been here 15, 20 years who were around when Tim Wagner was so invested and involved with this,” Assistant Controller Kelly Creager said. “There are a lot of new people around here who can see the passion others have for this event.”

Like Wagner-Meinert, I&M has also been a longtime supporter of Big Brothers Big Sisters. They’ve always had strong participation in BFKS but this was the first time the company grabbed the “Ruler of the Lane” trophy. Because Covid-19 cancelled last year’s event, I&M has had a long time to hold onto the trophy, take pictures with it and dream of defending the title.

“People were thrilled,” said Director of External Affairs Kim Sabrosky. “It was a big deal. We’ve always had very active participation, but usually we’ve had folks spread out on different days, and the thing about 2019 is we were able to do it all together on the same night. That made it even more fun.”

Rather than simply going hard after Wagner-Meinert, I&M’s rise to the top of the mountain started with some international motivation. Led by a big push from company president and Chief Operating Officer Toby Thomas (Ohio State fan) and former Director of Employee Education and Growth Carla Simpson (Michigan fan), huge bragging rights were on the line which helped push the overall company effort forward.

The leaders created videos and devised elaborate costumes to encourage participation and donations. Carla retired last summer so there’s currently an ongoing quest to find a replacement in the rivalry.

There’s still time. Because of the pandemic, I&M employees’ participation has been pushed back to October. BBBS rules makers have explained to both companies how this process will work and that I&M will not be informed of Wagner-Meinert’s total fundraising efforts until afterward. (But bribes are accepted!)

“There won’t be any astericks next to our win because they had to be delayed,” Cartright said.

Wow, somebody is in mid-season competing form already!

May the best team spin!