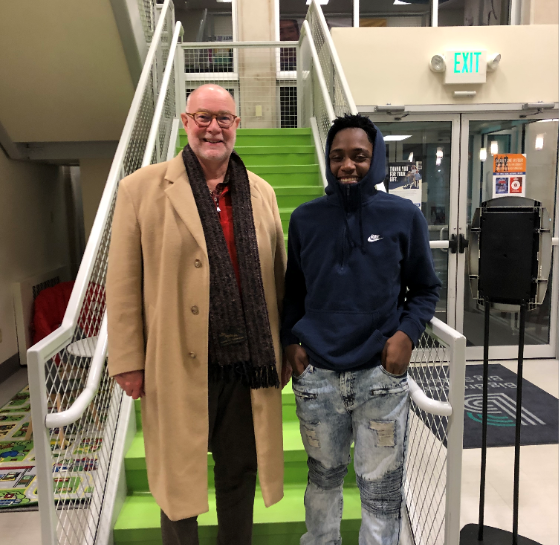 Sometimes God works in His way and in His time.

A few years ago, Tom Beaver was helping a young pastor set up a not-for-profit organization that was trying to intercede in areas prone to violence. Beaver and the pastor were taking some children to Erin’s House one day when he noticed a boy sitting outside by himself. Other children would walk up to the boy and talk to him before wandering off.

“You know what, young man,” Tom said to the boy. “You are going to be a leader.”

The boy didn’t say much.

As part of the mission of forming a non-profit, Tom and the pastor met with leaders of many similar Fort Wayne organizations, including Big Brothers Big Sisters Chief Executive Officer Josette Rider, asking for advice.

Two weeks later, Rider purchased lake cottage which just happened to be in Tom’s wife’s family for many years. Tom didn’t find out for a couple of weeks until Rider was talking to her new neighbors.

All the while, he kept thinking about the boy.

“I’ve always had a heart for kids,” Tom said. “I found out a little bit more about the family, and as we interacted with Josette, I kind of felt this put on my heart that this might be something I could do.”

So Tom was matched with Damion in August 2018. Thomas is now 72, and Damion is 16, but their age difference has proven irrelevant.

“I asked about the age, but I didn’t really hesitate,” Tom said. “I’m not going to go out there and play football and basketball, but there are things we can do. It’s very rewarding to work with him and try to help him and see him grow.”

Damion still doesn’t talk a lot, but when he does it’s because he has important things to say.

“He’s a good man and I can learn a lot from him,” Damion said of Tom. “Lately, all we’ve been talking about is stuff we’re going to do when things calm down. He’s big on integrity, honesty, responsibility. He is dedicated and committed to the stuff he does.”

Including his relationship with Damion.

“They have a bond together,” Damion’s mother Latoya said. “Tom is a great person and is very helpful with Damion, helping him with his work. He’s just been awesome and very kind to him. They get along great despite the age difference and enjoy each other.”

Part of that process is helping Damion work on his overall studies and the driver’s education information so he’s prepared when it’s time to get his license. They also ride bikes together, go to the library and play games. Tom realizes he’s a grandfather figure to most, but not to Damion who simply sees his friend.

“You get attached to them and they get attached to you, which is important,” Tom said. “The time goes fast when we’re together and it’s very rewarding. There’s a big trust factor there.”

Asked what he’d tell “more experienced” individuals about the possibility of becoming a Big, Tom said, “I would tell them it’s a very worthy endeavor. It’s very satisfying and it’s also something that is very positive and constructive. I’d highly recommend the experience. It’s one of the most rewarding things I have done, just being able to help a child.”

Almost like this is exactly what God wanted him to do.If you’d like to find out more about being involved with Big Brothers Big Sisters of Northeast Indiana as a potential Big, volunteer or donor, call 260-456-1600 or go to bbbsnei.org