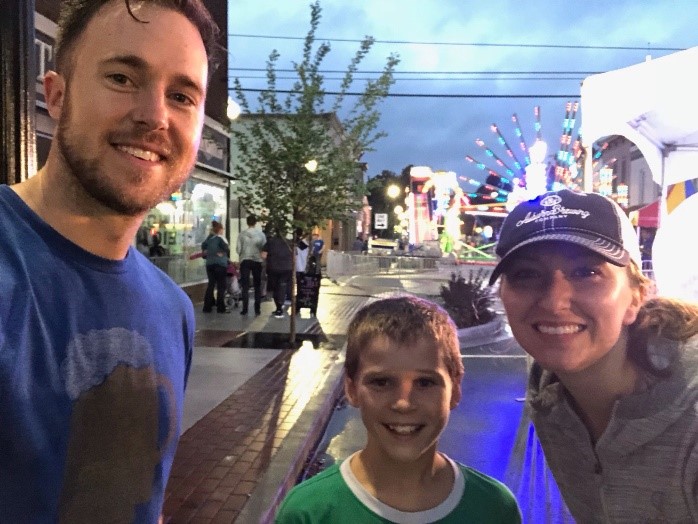 Little Brother Robert was always very full of energy, and always eager to learn. As a student, Robert always excelled in school but often goofed off and distracted other students. Robert had all the potential to excel but was in need of someone to defend it.

Having had other children enrolled in the Big Brothers Big Sisters program, Robert’s mother signed up Robert as well knowing the influence a Big can make in their lives. She hoped that Robert would find a Big who could be a good friend to him, expose him to new outdoor activities, and who can be a good role model for him.

But Robert found much more than that.

Energetic and excited to have a Little, Josh and Emma immediately clicked with Robert when they were matched in early 2016. All three loved active, outdoor activities – especially with Robert’s endless energy. Their time together always included something outside, commonly fishing or bike riding.

When asked about the relationship between Robert and his Bigs’, Roberts’s mother exclaimed, “Josh and Emma are wonderful! I think Josh has just as much fun if not more fun than Robert on their outings!”

According to Robert, “Josh and Emma are fun; they do a lot of fun things with me, and they are super nice. They’re good friends and they mean a lot to me.” Over their years together, Josh and Emma have sought to broaden Little Brother Robert’s interests – beyond the Pokémon that he adores so much. Emma and Josh have exposed Robert to many new activities such as laser tag, ice sculptures, and different board games.

Josh and Emma have also exposed Robert to new careers and opportunities for his future. They encourage him to strive academically and dream big for his future. They have helped him improve his reading abilities. The efforts showed this year when Robert had perfect attendance in school and made the Honor Roll! Thanks to the encouragement from Josh and Emma, Robert has decided to attend an extra summer school program focused on hands-on science, an interest Josh and Emma have greatly encouraged over the years. Josh has really worked with Robert on STEM opportunities and exposing him to careers related to engineering.

Over their years together, Robert has grown in his manners and politeness, now holding the door open for ladies and beginning to listen to his mother better.

Both Josh and Emma have expressed their care for Robert, saying, “We love just seeing how excited he gets when we are together!  It’s nice to be around a good kid and we hope to help him in some way. It is very fun and doesn’t feel forced. We are all very close. Our relationship has developed into an actual friendship and we treat Robert as if he was one of our nephews.”

Are you interested in becoming a Defender of Potential like Josh and Emma? Click on the links below to get involved with Big Brothers Big Sisters today! Defend Potential. Stand for youth like Robert. Join us.